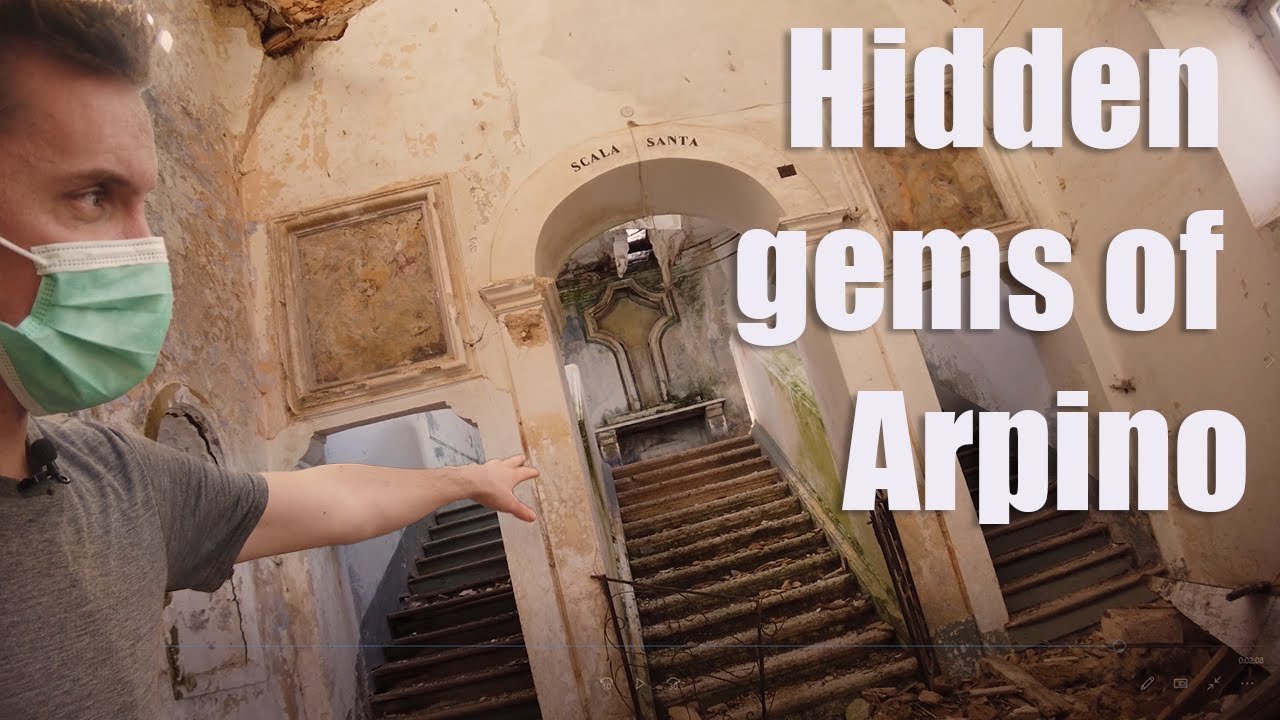 I’m here today to share the story of my real estate scouting trip to Arpino Italy (Population ~7,000). No frills, just the facts of what I experienced on October 30, 2020. I spent all of 10 hours in the area so by no means do I believe I’ve seen it all. What I saw however was a quaint little town set atop the valley with a lot of potential for rest and relaxation.

I started my journey on the north west edge of Arpino. Parking in front of a bar(Cafè) with a great view of a majestic Italian countryside.  I didn’t know anything about the area. It was a great accidental reward for driving through the night. The day before I shadowed Davide Mengoli in Italy’s heel, otherwise known as the Salento Peninsula.  It was a good 6.5 hour trip which allowed me a few hours sleep in the car at an Autogrill gas station on the way. (Yes, I can sleep in a car) By the time I reached Arpino, I was a bit more rested, but definitely not at the top of my game.

I was to meet Kylie Cossa, an Australian expat who currently resides in Arpino with her Italian husband and daughters. It would be a bit before Kylie arrived so I took an extra car nap from my personal hilltop perch. Short but sweet.

It was time to get out and see what Arpino had to offer. We were still a few minutes off from meeting Kylie, so I thought I’d head up the switchbacks starting at the steps of the church with ‘Madonna delle Grazie’ written in cursive cast iron on its entry.

This upper section Arpino Italy was extremely quiet whereas I saw very few individuals outside their homes. It was nearly 9 am, and most likely those that were venturing outside had already gathered in the main piazza for their morning coffee. The piazza, I would discover later on upon meeting Kylie.

One level after the other on its tight winding switchbacks, I eventually made it to the end of the road where I found a local picking olives by hand atop his ladder. If I remember right, he was literally the first local I saw since starting the climb. After I offered help, which he politely turned down, I found a recently remodeled property with its windows and doors missing. Later I’d learn that it was for sale for 80,000 euro. The question I had in my mind was, who had a 4X4 powerful and small enough to make it to the top of the hill on those tight streets?

After enjoying the sunlight as I peered down on the value overtop the adjacent olive grove, I spotted a cow trail that continued up the hill past the garage of the half finished stone villa. I figured I’ve got time and started to ascend.

I knew that if nothing else I’d find the best view in the valley to share with everyone on youtube and was hopeful to find more, but would never have guessed that I’d find ‘The Sacred Stairs’ of Arpino inside ‘La chiesa di San Girolamo’ which was now a ruin with collapsing ceilings and eroded walls. Below is the video I shared on youtube of that experience.

This Church tour was the perfect bonus after my experience touring houses in Salento because I could imagine the history and significance of these old churches as described by Davide. You can find those videos on the playlist ‘Apulia’ of my Youtube channel.

The roof caved in front of the Scala Santa

What would it be like to fully restore that hilltop church? The logistics alone would be a challenge, but the final result would be a boon to Arpino’s residents.

A bit of Arpino Italy history

‘La Chiesa di San Girolamo in Arpino Italy dates back to the 12th and 13th centuries and contains one of relatively few locations known as ‘La Scala Santa.’ The original stairs are located in Rome and consists of 28 marble steps and are believed to be the literal steps Jesus walked on when visiting Pontius Pilate. Arpino’s stairs became official in 1836 where pilgrims would climb the central staircase on their knees and descend on either of the wooden stairs located on each side. Today after extensive rain damage. The roof has caved in and to venture up the stairs is a health hazard.

What I find most interesting is that relatively few people recognize these stairs as existing and had I not read the words Scala Santa above the stair entry would not have known their significance. Wikipedia shows a list of 18 copies or replicas to the original stairs in Rome, with one located in Veroli nearly 30 kilometers away in the same province, but neglects to mention Arpino Italy.

If you as a reader have any insight to share about the status of Arpino’s Holy Stairs that could help clarify for us, I invite you to comment on this post and share any links and research you can. I find it really interesting and would love to hear your insight!

After my hike up the hill, I ran down to meet Kylie Cossa in the main piazza. We would be spending the morning and afternoon looking at a few houses available for sale in various locations of Arpino Italy.

Kylie shared her experience moving as an from her homeland explaining that each time they visited Italy it became harder and harder to leave. At a certain point that planted roots in her husbands hometown of Arpino and have been here for over a decade.

She initially started thinking she’d be a great olive farmer, but quickly realized she didn’t want to pick olives. This led to her realization that other people like her might love Arpino too! Since then, Kylie has helped foreign clients find their homes. Most recently helping with the project Reno Italiano that released on HGTV in January 2020.

Arpino had statues all over showing how important the city has been over the years. Cicero born in 106 BC is probably the most noteworthy born in Arpino Italy. Other remarkable people include Caius Marius born 156 BC and Marco Agrippa 63 BC (Architect of the Pantheon in Rome).

The statue of Cicero in the middle of the main piazza is hard to miss.

When seated with Kylie, a living Roman Senator, Massimo Struffi came to greet us. It makes one wonder why so many famous people come from Arpino?

There’s more to the interview portion of my experience with Kylie, but for now, I’d like to get to the meat of why I was there in the first place. You see often, I travel around Italy sharing typical real estate offers available. I’ve been to Lombardy, The Dolomites, Monferrato, Campania, Sicily, and Puglia sharing my experiences along the way. Here in Arpino, I fully intended to see a few properties to get an idea of what was for noteworthy in the Kylie’s eyes.

I told her the majority of my viewers are often looking for a minumum of 2 bedrooms. Preferably 3. It also seemed that a garden is a must. I guess the idea of planting your own basil and tomatoes is part of the Italian dream.

With the little time we had, Kylie took me to see a few properties. One of which you can view in the video below.

The house wasn’t 100% complete, but it did have the features I had asked for. It had a nice rustic interior with plenty of space between the upper and ground floors. The garden had an L shape but extended far down the hill. One of it’s best features was the southern facing windows on the back of the house. Mostly due to overlooking the valley in the distance.

For me, the surprising thing was the price. I admit the property was large. It’s often hard to discern a propeties value in Italy since it really depends on the popularity of the community. Arpino having already received a bit of spotflight on the international level may fetch higher prices, but an unfinished property for 140-150,000 euro felt like a bit much.

For this cottage, the roof remodel and earthquake protections installed could help justify some higher prices. These types of renovations are barely noticable when touring the inside of a property. So to the untrained eye, a lower asking price seems more likely. If you’re the type who likes comparing apples to apples. Forget what you know about other Italian cities. Get some expert advice from local contractors and engineers. In the end, if you’re searching for real estate and you feel like the price is too high, don’t make an offer! Find an opportunity that you’re comfortable with.

If you’d like to get in contact with Kylie to learn more about the real estate in Arpino, please fill out your email here and you’ll receive an email shortly.

I will be sharing more experiences from my time in Arpino on this blog very soon and am glad to be a part of the community!

To receive our best monthly deals