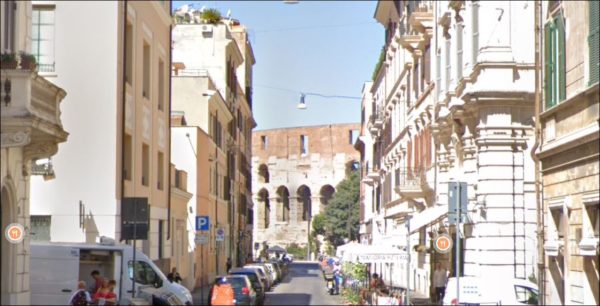 When you’ve successfully avoided descending into a meter-deep abyss thanks to your spectacular manoeuvring skills, when you have escaped a bus that spontaneously burst into flames or when you’ve gotten lost in the labyrinth of the Varco Attivi, you have entered the adventure called “Navigating Rome’s Streets”.

Really it’s like playing Prince of Persia: Sharp objects impaling the tires of your scooter. Using acrobatic abilities to avoid descending into metre-deep holes. Solving puzzles because the Varco Attivo (streets only for residents) has forced you off your known track and now you are stuck in an infinite maze.

Peril looms across every corner on your unpredictable journey through the Roman streets. When after a few days of rain, you dare to venture out on your scooter, it’s like driving through a terrain resembling the Grand Canyon, or the moon, and you have to zig-zag your way towards the traffic lights, risking your life every time you randomly make a turn to avoid descending into one of these valleys or craters, breaking your front tire and probably your head.

In addition to this, the enemy soldiers aka the Roman traffic police makes the journey even more risky, complicating traffic instead of making it flow more easily, and every time you drive to work and see that queue forming at the crossroads, you know it’s not because of rush hour, it’s the wicked meddling of Roman traffic policemen.

If this isn’t challenging enough for you, rise a level and get into an old Fiat 600 (that does not belong to you) with dysfunctional windscreen wipers and a broken blinker to pick up the kindergartener you are babysitting from his swimming lesson. While it is pouring outside and you don’t see a thing and every time you need to turn right you have to let down the window to signal your change of direction with your arm, drenching your sweater in rain. Once little Flavio is safely tucked up in the backseat and you are starting the engine, a loud “BEEEEEEEEEEEEP” fills the air and you get all anxious because you might have just set off a bomb, but really it is just a technical issue because the car hasn’t been checked in years.

WIN A HOUSE IN ROME JUST 80 METERS FROM THE COLOSSEUM

After 20 minutes of circling the neighbourhood, the only available parking spot is uphill, sideways and, say, two centimetres longer than the car itself. Manoeuvring the car in there is like doing an extensive bicep work-out at the gym while requiring otherworldly precision skills, a bit like in Mission Impossible when Tom Cruise comes gliding down the ceiling on a rope and needs to unlock the safe without touching the floor. Imagine feeling that tension. All concentrated in your upper arms. While all around you people start honking because you’ve been blocking the street for who knows how long.

You get back home and want a rest, but the “seconda fila” issue is unfolding on the street right in front of your apartment when some poor person needs to get his car out but simply can’t because a massive black Mercedes has parked him in, warning lights blinking since half an hour. And the poor person honks, and honks, and you start creating a song that goes along with the honking so the honking will get less annoying but it doesn’t.

And then it’s three in the morning and you are driving home from your shift at the pub (read more about crazy pub experiences in Rome here), focusing all your attention on the pitch black street in front of you because street lights have yet again been turned off, and then it happens. You risk looking up for a second and your eyes marvel at the illuminated Coliseum a bare 20 meters away from you, and you think this is all worth it, because really how many people in this world can say that they are passing a 2000-year-old monument constructed by an ancient civilization where people died to amuse other people, simply while driving home from work.

Win a house in Rome!

To receive our best monthly deals